Ecology, tolerance and common values brought together teenagers from Bulgaria and the Netherlands in the BRIDGE Interfaith Youth Camp#2019

Four years in a row BRIDGES CC in partnership with a local government, URI Europe and private sponsors managed to design one very important tool for promoting tolerance, mutual understanding and building bridges across cultures and religions – Interfaith Youth Camp “BRIDGE-Inter-Cultures”. This year for the camp’s venue was chosen Plovdiv as the Cultural Capital of Europe for 2019.

During the period 15-19 July, 31 youngsters (13-17 years) from Bulgaria and the Netherlands gathered together in the International Youth Center (YCP) to focus on the cultural richness of Plovdiv, history and traditions as well as on the model of peaceful co-existence among the representatives of different religious communities in the city for centuries and to build bridges of friendship.

During the time of the camp participants visited 6 temples, met religious leaders, discussed very important faith topics, had variety of workshops with a focus on ECOLOGY, art and sport as tools for making dialogue. In that way all youngsters gained a new perspective, improved their knowledge about “the other” and learned how important is to make small, yet effective changes in our personal every day habits to help protect the Earth. 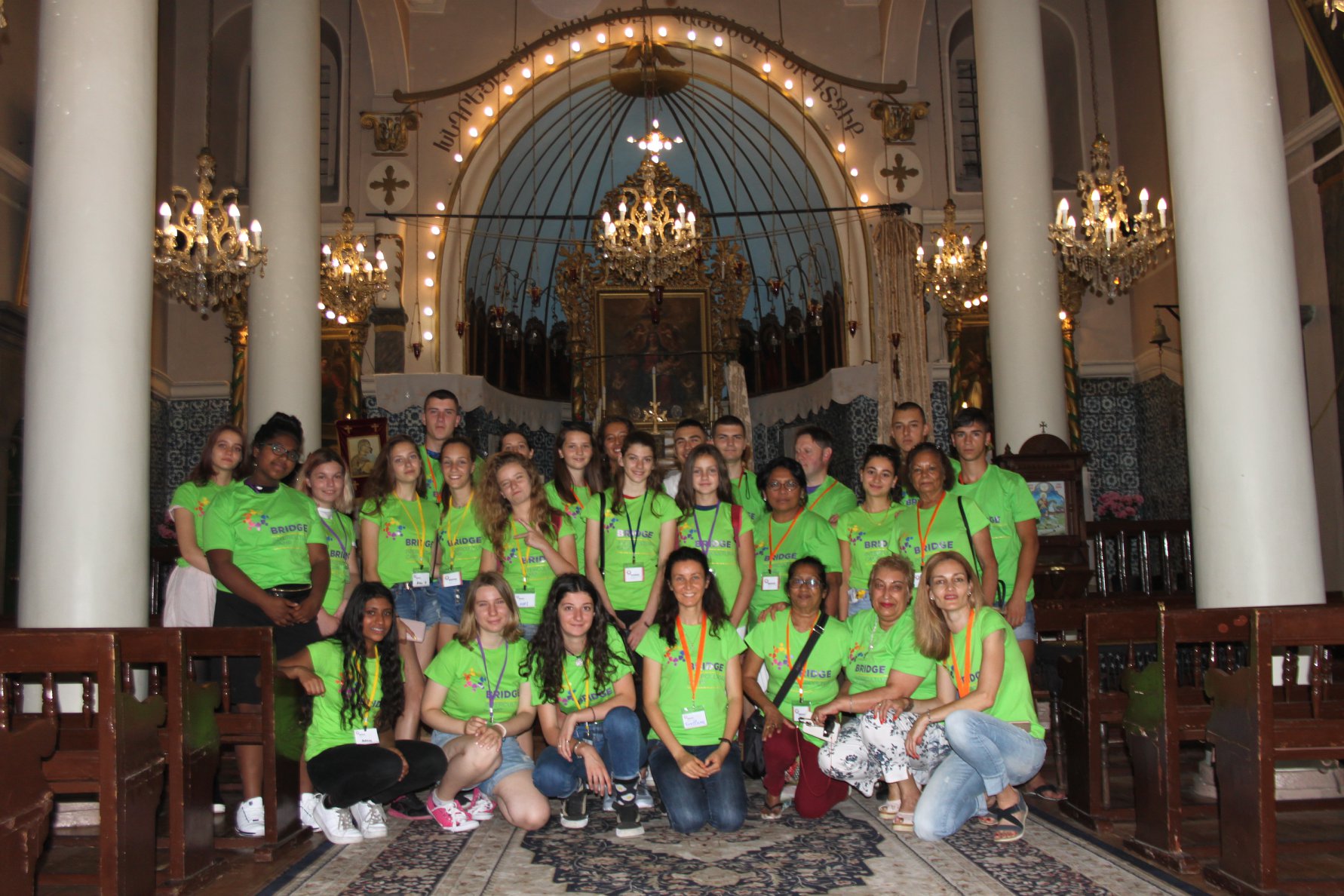 Day 1
Just after the arrival of the group, we started with the orientation, then set up ground rules and got acquainted with the camp rules. Then we continued our intense program with a walking tour to the Old city with the guide Teodor Danchev, young volunteer in Plovdiv#2019 and BRIDGES’ youth leader. The important moment was our visit to the Armenian complex and warm introduction from our partners from the Armenian community Hripsime Ernisyan – Parekordzagan, followed by the visit to the Armenian Apostolic Orthodox Church “Surp Kevork”. Angelina gave a certificate of gratitude for the good partnership to Hripsime Ernisyan.

In the evening after the dinner, we had a special cultural program - a guitar party by Velislav Velev - singer, guitar player and at the same time very well-known Bulgarian lawyer and a dear friend to BRIDGES.

“For me, personally, it was the first one, because I became a part of the team this year and I've never felt more in place and understood in my life before. The symbiosis between spirituality and my own feelings and experiences there overlap really strong.” – Ateya, 15

Day 2
Early in the morning the official working program of the camp started with the presence of the Deputy Mayor of Plovdiv Mr. Georgi Titykov. He gave a speech and expressed his joy and satisfaction of the fruitful partnership between the Plovdiv Municipality and NGO Bridges. Partnership which shows that we all together can cooperate for the common good and build bridges of tolerance and understanding. Together with all the participants he participated in the first practical group activity with the UN Sustainable Development Goals (SDG) ball in a circle. Mr. Titykov presented himself in a simple way “I am George, I am from Plovdiv and I am Eastern Orthodox Christian”.

“There is a chance for us to show together the model of cooperation in the name of the common human values and building bridges between people.” – Deputy Mayor said.

Then we continued with a visit of the Orthodox Church “St. Konstantin and Elena” where the host was Father Petar Hubenov, who spoke in a beautiful way about LOVE and compassion. After the Orthodox church, we visited the Catholic Cathedral. Very important parts of the program during the camp were the practical activities and workshops. This year the main topic was Ecology and we included several activities related to that. The water Olympic Games were the first one. Silviya Todorova, the youth president of the Bulgarian Water Parliament led us on that journey. She made an amazing presentation and made some proposals how with some small changes in our habits and reducing the use of plastic, we could help in protecting the planet from pollution. Immediately after the workshop most of the participants stopped using plastic bags and bought metal straws for multiple-use.

In the context of the ancient history of the city of Plovdiv and rich experience in interfaith co-existence for centuries, in the late afternoon at the Youth Center our youth group worked hard and with great interest in the "Mosaic of Faith" workshop, led by Atanas Kameshev - professor at the National Art Academy "Tzanko Lavrenov". Using old technology, we all created pieces of art, small tablets with fragments from the Roman Basilica in Plovdiv.

“We made a connection between two countries and moreover between our souls. We made valuable friendships and we had unforgettable moments. There are so many words to say but it’s hard to describe something that is meant to be felt. I’m expecting excitedly the next camp and I’m wishing every human to feel the way I did after this journey.” - Slaveya, 16

Day 3
This day was marked with two special visits: we started with Djumaya Mosque where the chair of the Muslim community and president of the Yeshilay BG Foundation Ahmed Pehlivan spoke about Islam and then we had a conversation about the addiction of the younger generation to electronics.

“During the third day of camp we visited the Mosque in Plovdiv. I was very impressed by the interior. It was of great interest to me that we had to enter bare footed and also why Muslims use rosaries and what are their customs and holidays. I directed my questions to Mala and she was very responsive and informative with her answers. I was happy that she was the one to give me answers. It was definitely an enriching experience! It is unlikely that I would’ve visited a mosque in other circumstances….” – Slviya, 17

New element in the camp program this year was the active participation of the The Church of Jesus Christ of Latter-day saints (LDS church). We visited the LDS building where a group of young missionaries and their leaders welcomed us very friendly. Krasimir Kolarov, director of the Bulgarian mission and President Devis, Central Eurasian president, presented in a very interesting way the main tenets of their faith and religious practice. Together we had lunch, played several interactive games and enjoyed our time together. At the end Krasimir Kolarov received a certificate for partnership and cooperation from Angelina Vladikova, BRIDGES’ chair.

Day 4
On this day the youngsters had the chance to visit the second working Synagogue in Bulgaria - “Zion” and to listen to a very inspiring and interesting lecture, given by Alex Levi, young leader from the Jewish community. He spoke about the Jewish beliefs, Holocaust and the rescue of Bulgarian Jews. One of the highlights of the camp this year was the football tournament with the professional youth team of Botev Plovdiv. Sport is a very important tool for dialogue, and working in a team was a great lesson for young people.

“For the first time in my life I’ve got the courage to play Football without even knowing the game’s specifics and rules which taught me that I shouldn’t overthink everything and I shouldn’t limit myself.” – Gabriela, 16 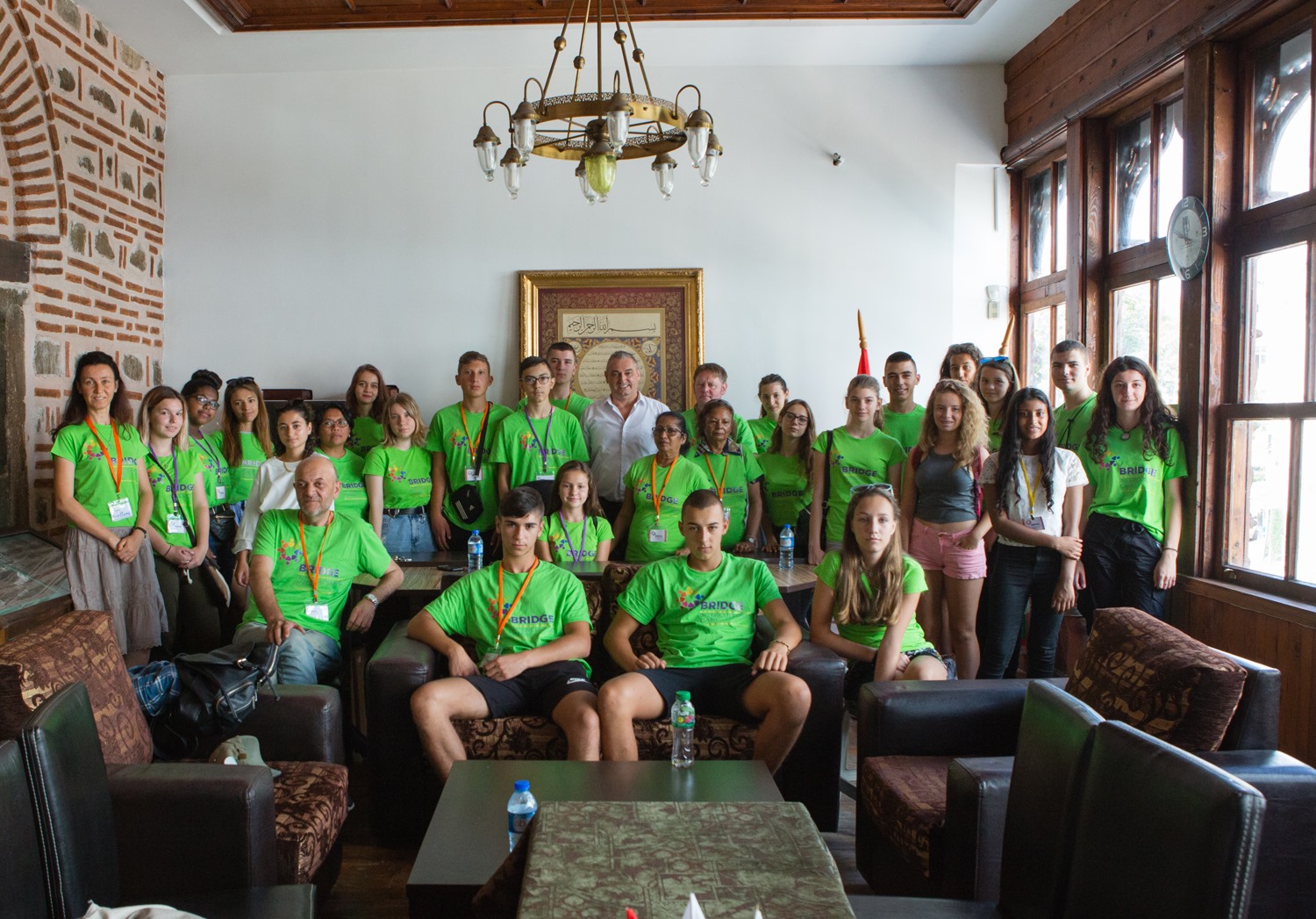 Day 5
Our last day and departure. We had a very emotional morning – with the final session, video message from Sarah Oliver, URI Global Youth Coordinator and finished with the certificate ceremony. Every participant expressed his/her feelings, emotions and shared thoughts about the camp, program, accommodation. Mala Wallage invited all of the participants to be part of the next camp edition in 2020 in the Hague. Every participant received together with the certificate a copy of a coloring book - an excellent tool for interfaith dialogue for children, made by the joint efforts of URI&BARAZA.

“Everybody from our group is completely different from the other, but at the same time we were one and the same. This is exactly what I think a bridge between cultures is- from the difference to the equality. The eternal friendship all of us built during the camp will forever be in our hearts and souls, and will develop in the future for sure. All the different religions we got to know found a way to our minds and left bright light there. Every game we played brought us indestructible joy and made us feel like a team even more. Angelina Vladikova and Svetlana Karadzhova, thank you, for making me a part of one better world where it's easier to cross the bridge, leading to the other side. A world in which we are building this bridge, not destroying it. A world where it doesn't matter that our differences like cities, cultures and religions are separated- we are all under the same sky! This the world I want to live in! This is what OUR world should be! The new horizon you showed me is bright. Good luck! I can't wait to see all again soon!” - Ateya, 22.07.2019

We all felt like part of one family, nobody wanted to be separated from the others. “See you next year!” 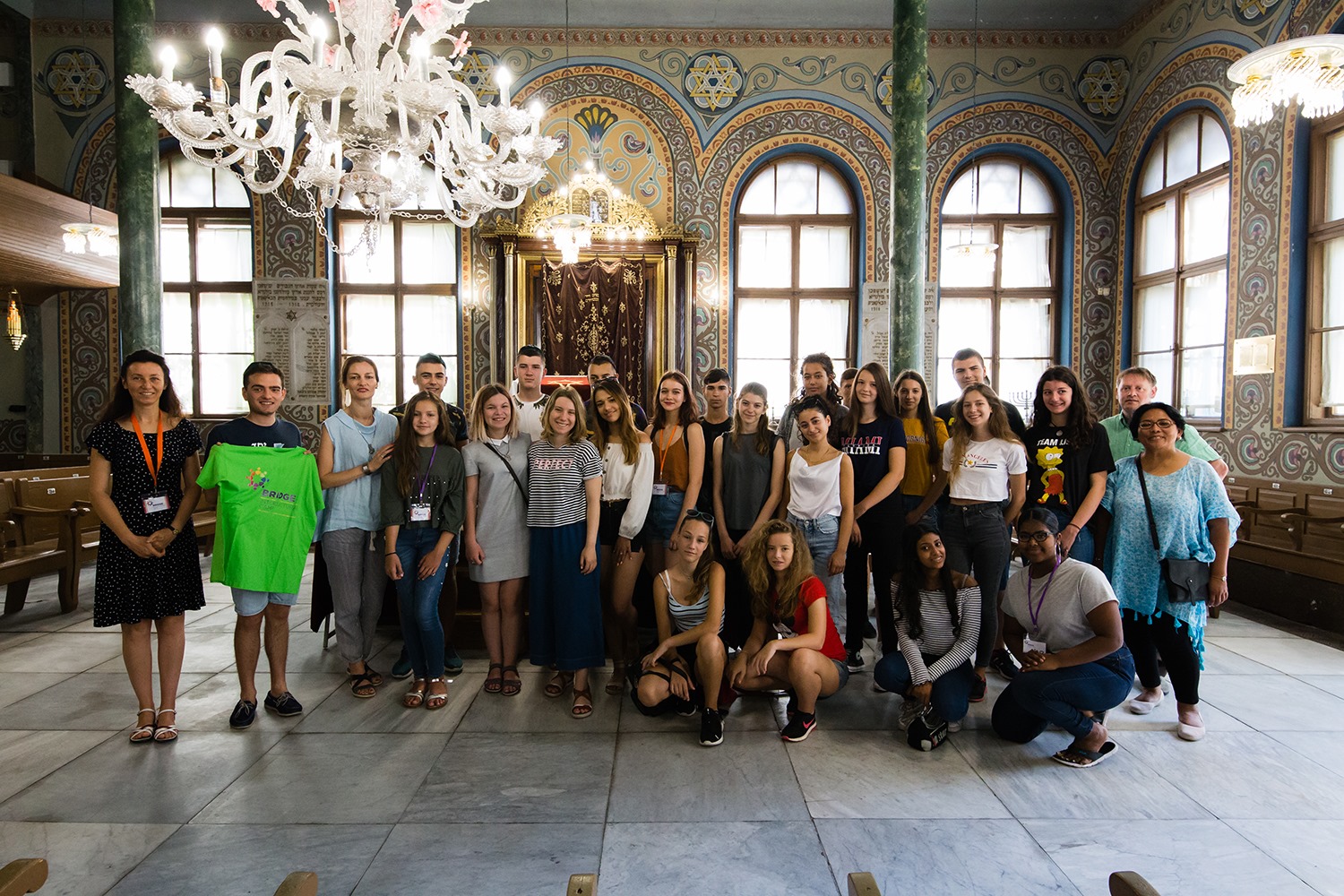